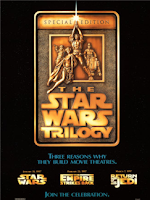 What’s kind of funny is that these days “Star Wars” is omnipresent. There are video games, there are televisions shows, there are countless releases of toys, CDs and DVDs out there to keep the fans happy.

But I remember the dark time, the time that spanned from about 1986 to around 1995, a dark decade where Star Wars was seriously uncool. There was no word on new movies. The toys were long gone. Even the musical scores were tough to find. Things started to pick up around 1992 or so when “Heir to the Empire” was released on paperback. Timothy’s Zahn’s book nailed the feel of the Star Wars universe so well that folks started revisiting the films and talking about them again.

But the lead up to the twentieth anniversary was something else. The toys came back, the sound tracks were remastered and rereleased. The movies were released one more time on VHS in their original form. At the time we didn’t know what the meant exactly, but we snatched those suckers up.

Then the trailers started to appear. All three movies, in theaters again for the 20th anniversary. They were cleaned up in both the visual and sound departments. And there were going to be a few “new surprises”. Sure, some of the surprises ended up causing long time fans convulsions, but at that time expectations were high.

Thing was, Star Wars was cool again. Everyone who popped into the video store I worked at was buzzing about it. We couldn’t keep the trilogy on the shelves. I was attending university at the time, and folks there were excited. Most of the guys I knew grew up with the movies as kids, but didn’t really have clear memories of seeing the movies in the theaters. So this was going to be a real treat. It was a great time to be a Star Wars fan.

I’m still not sure how it happened, but I ended up with free tickets to see “Star Wars: the Special Edition” about a month before it came out in theaters. I brought my wife (then my girlfriend) and she picked out a pal from her work. Or maybe he got the tickets… I’m still not sure. Anyway we headed out to the theater a few hours early, not sure what the lines were going to be like. We weren’t the first, but we were near the front. There was a guy sitting there with a cardboard sign reading “I am R2D2’s lovechild”.

You could tell everyone was excited. And while there were some folks dressed up, it was nothing like the spectacle my friend witnessed when he saw the film opening night at Grauman’s Chinese in Hollywood. Darth Vader and his Stormtroopers stopped traffic that day. But it was still an excited crowd.

We were let into the theater, found our seats, close to the middle, and waited. You could feel the electricity in the room as way too many geeks were waiting for the movie to start. And once “A Long Time Ago in a Galaxy Far Far Away…” appeared on the screen, we went nuts.

It was one of the most fun experiences I’ve had at the movies. The crowd was into the movie, obviously, and having a blast. They were respectfully quiet for a good portion of the movie, and yet overly enthusiastic about all kinds of things. Every introduction of every main character got applause and cheering. Classic lines were greeted with cheering. And the changes were absorbed in absolute silence.

The moments I remember vividly are the following: The first time Greedo (the green alien that Han kills) appears on the screen in a 30 second flash got applause. The transition from C3P0 lost in the desert to R2 D2 rolling around in the canyon was cleaned up and a gorgeous digital sunset was added. This got a huge Whoooaaaaaa! from the crowd, followed by laughter at our unified gasp. No one but a bunch of hard core Star Wars fans would even notice that change, but there it was. And now every time I watch the special edition with my wife, we both utter the “Whoooooaaaa!” at the scene in tribute. And then there was the huge applause for Porkins, and then mock wailing when he was blown up about five minutes later.

The excitement of the whole thing was a highpoint as a fan. After that we caught the films in the theater and enjoyed them. It was great to see the asteroid chase and Luke’s final duel against Vader on the big screen. At the showing of “The Empire Strikes Back” we attended there were some small kids sitting nearby and it was great to hear their reactions to the film and wondering how close they were to my own back in 1980.

All the excitement coursed over into the hype for the first new Star Wars film in 1999. After that the prequels ended up changing things for long time fans, but that’s the subject of another post.

Here, I just wanted to reminisce about the good times, the late 90’s when Star Wars was cool and everyone was talking about it in a positive way.