I’ll just come out and say that the 1980 version of “Clash of the Titans” was one of my favorite films when I was a kid. It probably had a lot to do with fostering my love for Greek mythology, which lead into other myths legends and stories. So I have to admit to being a bit afraid to watch this version. But I figured there was a lot of potential to do something really cool with the story of Perseus and Medusa. That and the fact that Rifftrax decided to provide a commentary for it.

Perseus (Sam Worthington) may be the son of the god Zeus (Liam Neeson), but that doesn’t mean he has to like it. After the evil god of the underworld Hades (Ralph Fiennes) kills Perseus’ mortal family, our hero vows vengeance. Conveniently, the city of Argos is in a bit of a jam. After mocking the gods and tearing down their statues, they are surprised to discover that the gods are a little pissed off. Imagine that. Hades gives the people of Argos ten days to sacrifice the princess to the dreaded Kraken. After Perseus gets a pep talk from the mysterious Io (Gemma Arterton), he decides to find a way to destroy the Kraken, thereby thwarting the gods and saving the city of Argos. Of course he’s going to have to do battle with mythical monsters, jump in slow motion and make googly eyes at Io before we get to see an actual “Clash of the Titans”.

Putting aside my nostalgic love for the original, this movie could have been a real adventurous blast. But at every turn we get dower characters, feeble dialogue, and lackluster acting. You get the feeling that making this movie was more of a chore than a chance to do something fun. The end result is a flick that has some exciting action set pieces, but not much else. The fact that the video game “God of War” is superior in nearly every way just tells me I should have popped that in the PS3 instead of this.

Why do people enjoy watching quest films? Because they want to be transported to a wondrous world, thrill to some action, see some imaginative sights, and feel the accomplishment with the hero as they achieve their goal. It’s pretty simple really. It’s what makes movies like “Raiders of the Lost Ark” or “Lord of the Rings” entertaining on a basic level. If a fantasy film can do that simple part right, then most likely it will end up being a good time, and remembered fondly.

I’d like to say that “Clash of the Titans” tries to do this, but I don’t think I see enough evidence to say even that. Most of the cast and crew are just trying enough to get the job done and not much more. This half assed approach ends up sucking the energy and life right out of the film.

First off, let me just say this. If you are expecting this movie to have any real basis in a) the original film or b) Greek mythology, then you’re going to be disappointed. My initial reaction to the film was very negative because I was so annoyed by all the stupid changes they made to the basic story or Perseus and Medusa. But to be fair, the 1980 version of the story strays pretty far from the original tale. It’s best to look at this 2010 creation as a story set in a fantasy world influenced by Greek mythology. Any mythology buffs will feel better with that in mind and not get annoyed at some of the bizarre changes made.

For a popcorn movie, it’s a bit surprising that there is a strong theme running through the film. It actually deals with free will. According to the film, humans were created by Zeus. The prayers of the humans keep the gods immortal, and without them… um well it never explains what would happen. So in that way it’s a lot like a summer popcorn movie – lots of plot holes. Anyway, the trick is that Zeus gave these immortality-generating machines free will. Now they’re all grumpy about having the gods ignore their prayers, so they are openly defying them. This sets up a struggle between the gods and humans. This struggle is underlined throughout the script and the film. The gods are harsh masters and humans are fighters, never willing to back down. Perseus embodies this fighting spirit, even though he’s a demigod, he chooses to fight for the humans.

This theme has some potential, but it also has a unfortunate side effect. Everyone in this movie is grumpy. Perseus spends the movie pissed off the whole time. Zeus is pissed off at the humans. Hades is pissed off at everyone. The soldiers accompanying Perseus spend most of the movie growling at each other or about the unfairness of the gods. Even Medusa is pissed off because Athena ignored her prayer. I guess when your target audience is teenage boys angry with their parents, this may appeal to them. But it made the movie a joyless experience. The comic relief characters are two foreign types (they don’t speak with an English accent) who do stupid things and yell a lot. Kind of reminded me of the Brownies from “Willow” but less annoying. These two are supposed to add some levity, but they just irritated me. Other than that, there’s not a light spot to be seen.

I’m not asking for a silly mechanical owl to show up and add laughs, I just hoped that maybe we’d get a few moments of characters not whining about the gods or humans or how much their life sucks. You’re on an adventure! Have some fun! But no, instead it’s just one dower trek after the other. What’s missing are those moments from the Indiana Jones films where we see the delight in Indy’s eyes as he nears his prize, or works out the clues. Perseus never seems delighted, even when he’s riding an awesome black Pegasus. I guess it’s not cool to look like you’re having any kind of fun.

Like I mentioned most of the performances are average at the worst. No one really stinks, but most of the cast just seems to be showing up for the paycheck and moving on. Three exceptions spring to mind. The late Pete Postlethwaite plays Perseus’ mortal father and does a great job with the small part. He’s a pro at stuff like this. Mads Mikkelsen as the lead soldier Draco gets into the role as the gruff commander. He adds a bit more to his glowering, a kind of pain that Worthington could have used as Perseus. I kept wishing that the movie had been about Draco, because he seemed interesting. His accent makes a few of his lines a bit tough to understand, but he is out-acting everyone around him. Well there is the exception of Fiennes who dives into full scenery chewing mode. He’s over the top and is having a blast, nearly as good as he is as Voldemort in the “Harry Potter” film.

I also want to mention Arterton in the film. She looks good in her Greek garb and seems to be putting a bit of effort into the part. She’s actually pretty good except for the small fact that she chose (or was directed) to talk exactly like Liv Tyler did as Arwen in “Lord of the Rings”. The director even goes out of his way to film her in a similar fashion, making her look luminous and elf like. It’s a real distraction, and the more I think about it, the more I’d like to believe that this wasn’t Arterton’s decision and something the stupid studio insisted on – so they could have another connection to the famous trilogy.

You see this whole movie is filled to the brim with borrowed images, borrowed plot lines, borrowed style, borrowed performances. It really doesn’t have an original bone in its body. If you watch any amount of fantasy or historical epic films, you’ll begin recognizing all the cribbing. Obviously there’s “Lord of the Rings” in there, but you’ll also find “300”, “Gladiator”, “Rome”, “God of War”, and “King Kong (2005)”. 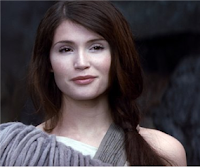 Borrowing can work just fine if it’s done right. “Transformers” managed to be entertaining even though it was far from original. But in this case it just feels calculated. “These movies were successful, lets take elements from them and cram them into our movie!” Maybe it’s my perception, because I felt the same way about “Independence Day” and everyone else thought that those were “homage”.

The score by Ramin Djawadi works fine. It’s got a real modern action score sound and it fits the movie pretty well. It lacks some of the spirit it could have had, but much like the rest of the movie, its content to sound like other popular scores and not really push things beyond the grim and action oriented.

What does work are the action set pieces. These were highlights of the original film and they are really well done here. The giant scorpion battle has some really creative sequences in it and is filmed fairly well. Yes, there is use of hand held shakey cam, but it’s not so bad that you can’t figure out what’s going on. All the action is quick and clear in all these scenes. My favorite of the sequences is the Medusa battle. The environment (while completely borrowed form “God of War”) works wonderfully with the fluid enemy. She gets to use all kinds of tricks and our Greek heroes have to think on their feet to survive. This was the highlight of the original film and it is the highlight here. The finale with the Kraken is an actual improvement over the original, with a lot more interesting things going on and a real urgency to the sequence that they just weren’t able to pull off in 1980. You could take these scenes and turn them into a solid half hour action reel and enjoy that.

It all boils down to this. “Clash of the Titans” had so much potential. You’ve got a great set of mythological characters to work with. You’ve got plenty of room for huge scope, action, wonder and most of all: fun. There was lots of room to improve in the script, in the special effects and turn it into a modern film that could please anyone. Instead we get a half assed movie, trying to get teenage boys butts in seats and forgetting to smile, and not seeing the wonder of a world where horses can fly, scorpions can be the size of buses, and a woman with snakes in her hair can kill you with a glance. This was a missed opportunity and that’s why I give it a rating of 1.
Posted by Roman J. Martel at 7:19 AM