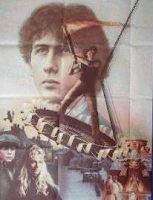 I never really asked myself the question, what was Sherlock Holmes like as a youth. Well that might have been because I had only ever read one Sherlock Holmes story. But someone must have asked this question – because they made a whole movie about it!

John Watson (Alan Cox) arrives at his new school in London a bit nervous but ready to make new friends. The first bloke he meets is Sherlock Holmes (Nicholas Rowe) a rather aloof chap who has keen powers of deduction. The two become good friends, and spent their spare time hanging out with Elizabeth (Sophie Ward) and her oddball uncle Professor Waxflatter (Nigel Stock). But Waxflatter is embroiled in a mystery as one by one former colleges die under mysterious circumstances. Holmes and Watson start to investigate, but soon find that the answer to the mystery is tangled in a web of revenge, cultists and a mind almost as keen as the one possessed by “Young Sherlock Holmes”.

While the plot maybe outrageous and the coincidences laughable, this movie has a wonderful spirit of fun to it. The whole relationship between Holmes and Watson and how it may have been forged in their youth is handled really well. It carries the movie past the more ridiculous moments. As far as pure entertainment goes, this movie is a solid pick.

There’s an odd set of connections between “Young Sherlock Holmes” and “Harry Potter”. First off, both films feature a supporting antagonist named Dudley. Chris Columbus wrote the screenplay for the 1985 film and directed the first two Harry Potter films. Both films take place in and around a boarding school. Both films have a Victorian feel to them (especially obvious in “Harry Potter and the Sorcerer’s Stone”). Both films feature insane cult leaders bent on revenge. Ok, maybe I’m stretching it a bit, but I always found it funny that whenever I hear the name Dudley the first thing I think of is the slimy jerk in “Young Sherlock Holmes”.

Let me get this out of the way. I grew up with this movie. My sister and I really enjoyed watching it as kids, and it was on regular rotation on our VCR back in the day. We liked the adventure, the bizarre hallucinations and the fact that there was a dog named Uncas in it. So it’s a bit tough for me to view the film completely objectively. So if this review sounds a bit too fond… well you know why.

The main issue I see raised against this film is Chris Columbus’ over the top script. It isn’t good enough for Holmes to solve murders, these have to be completely insane murders conducted by a Egyptian cult that practices their death religion in a giant wooden pyramid. The movie never takes the leap into fantasy. The strange imagery you do see is because the victims are hallucinating. But the film really stretches credibility when you see a huge bald killer chasing kids through a cemetery while wielding a sword. No one notices this or thinks it’s odd?

But check it out, Columbus wrote this screenplay right after he wrote “Gremlins” and “The Goonies”. Steven Spielberg was on the production credits for all three films, and I think its safe to say that he had some input into how the story was going to play out. It explains why this film could easily be called “Sherlock Holmes and the Temple of Doom” a name a few critics gave it. Or maybe you prefer “Sherlock Holmes and the Pyramid of Death” which is the films name in some international markets. That oh so 80’s Spielberg touch is all over the film, even if Barry Levinson was helming it.

Levinson does a good job with the film balancing the large set pieces and special effect heavy scenes with the intimate character scenes between Holmes, Watson and Elizabeth. The character interaction is essential for the film to work. Holmes and Watson must have that warmth and understanding of each other’s talents or else it will feel wrong. Rowe and Cox do a great job, each one nailing their characters as well as creating a valid friendship. Sure the Watson of this film is more Nigel Bruce than David Burke, but it still works well. On the other hand Ward is a little flat as Elizabeth. The part is underwritten, but Rowe’s reactions to her make the connection between them work.

The supporting cast is very good all around. Of special note is Freddie Jones as Chester Cragwitch. This poor man is saddled with a large chunk of exposition, but his great voice combined with his off beat performance makes it all work. Also key to the film is Anthony Higgins as Professor Rathe, Holmes fencing teacher and mentor. Rathe seems to really like Holmes even when events take a turn that pits them against each other. When things get serious, Higgins is able to turn the man into a much darker character, one consumed by hate and willing to do anything to achieve his ends. It’s a good villainous performance.

The large set pieces including the ones revolving around the ceremonies in the pyramid are staged well and filmed with skill. The sets and location shooting in general is top notch and really adds to the film. But Levinson makes sure the action sequences are clear and easy to follow. But one of my favorite sequences is when Holmes accepts Dudley’s challenge to find a lost statue. Levinson takes us all around the school editing together a montage of deduction that leads up to the resolution of the mystery. Combined with Bruce Broughton’s score, it’s a great scene.

Broughton isn’t known to most moviegoers and that’s a shame. He’s done some wonderful work, especially in the Western genre (his scores for “Silverado” and “Tombstone” are excellent). But this is one of the few times he delved into this type of adventure scoring and he does an amazing job. He takes some of the styling of John Williams and combines it with a very English tone and creates a superb musical adventure. There are two main themes that appear in the film, one that surrounds the mystery sequences and seems connected to Holmes. The other is linked more to the friendship sequences and seems connected to Watson. These two fuse together to create a wonderful musical cue that can be enjoyed during the end credits. I also have to mention the choral powerhouse of the Ceremonial chant that is heard twice in the film and is warped into the villain theme by the end of the film. Great stuff. I heartily recommend this score to fans of big adventure music in a John Williams style. This is an 80’s classic.

This was a visual effects movie in many respects and most of it’s notoriety today is based on the fact that the first completely computer generated character was created for this film. During one of the hallucination scenes, a stain glass window of a sword wielding knight leaps from the window to threaten a priest. Back in 1985 this effect was jaw dropping. On top of that all kinds of other effects were used, including stop motion creatures as well as traditional blue screen and miniatures. Using this vast array of effects keeps things from looking too over top and lets them blend into the film.

Here’s what it boils down to: the film is fun. It was made to entertain and it does just that. All the production elements work well together and while it wears its oh so 80’s heart on its sleeve, it never really was shooting for anything more than that. I recently revisited the film and had a blast watching it again. Yes nostalgia played a part in my enjoyment, but I also think that this is just a well-made adventure film. If you’ve never seen it, give it a shot. At the very least you’ll enjoy a great musical score and see some pioneering visual effects from the day. At the most you’ll have a great movie to watch on a wintery weekend.
Posted by Roman J. Martel at 10:29 PM