The children of Mars are falling into a stupor of malaise. Martian leader Kimar (Leonard Hicks) consults the wise elder and the oddball declares that Martian children need Santa Claus. Kimar and a select group of Martians race to Earth via a rocket propelled by string and sparklers to find Santa (John Call). They abduct two earth children to guide them to Santa’s location and promptly nab the jolly old elf. They get him set up on Mars with a workshop with an assistant Droppo (Bill McCutcheon), the laziest Martian. But a bitter angry and mustached Martian named Voldar (Vincent Beck) hates Santa Claus and all he stands for. Can a combination of earth and Martian children unite to help Santa Claus conquer the Martians? 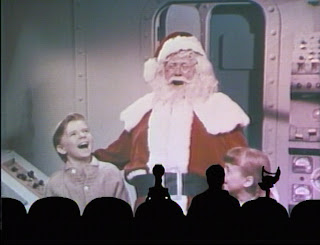 There’s a certain school of thought that says that a movie targeted toward children has to play down to them. That’s the difference between a children’s film and a family film. For a great example of a family film, check out the animated films by Hayao Miyazaki: especially Ponyo or My Neighbor Totoro. Both films tell simple stories with conflicts that aren’t too frightening or complicated for younger minds. But the movies never play down to the viewers. An adult can watch both films and enjoy the whimsy, playfulness and heart contained with them. You never feel like you’re losing brain cells when you watch a Miyazaki film.

Then there’s something like Santa Claus Conquers the Martians. It’s dumb, really dumb. It assumes you’re dumb (because you believe in Santa Claus you poor dope) and goes out of its way to entertain you in the most idiotic way possible. The biggest and most horrifying example of this is Droppo. My god, I don’t think I’ve ever seen anyone mug and mince around as much as Droppo. From the first 30 seconds you see this brain dead extraterrestrial you want to reach through the screen to strangle him. He’s not funny, not once. Even as a kid, I’d probably hate him. The movie insists that Droppo is the height of comedy and forces him into scene after scene. The kids in the film appear to be humoring him, when really should just be put out of his misery. 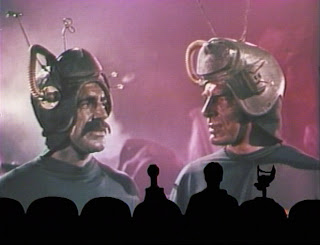 Then there’s Voldar, a walking villain cliché. Between his sneering, evil laugh and huge mustache you just know that he is EVIL. Beck chews all the scenery he can get his hands on. When you get a scene with him and Droppo in it, you start praying for it to end or for the screen to explode. At least Voldar isn’t aggressively annoying. He’s just grumpy and stupid.

Stupid seems to be the name of the game in Santa Claus Conquers the Martians. People don’t act like this! Not even Martians. Santa Claus isn’t jolly, he’s an imbecile with a complex that makes him laugh at everything. Both sets of children aren’t the sharpest tools in the shed and act more like how a grown-up thinks a kid would act. It’s really just an odd set of performances.

The plot itself actually has potential. This could be remade with a better script and maybe animated and make a really entertaining holiday film. The idea of Martians abducting Santa and kids trying to save him could work. But the stupid contrivances in the story screw things up time and again. What is the deal with the polar bear? Why introduce the robot and then barely use him? Voldar’s best plan is to abduct Santa and hold him in a cave? Is Santa so powerless that he can be abducted by the stupid Martians in the first place? The big finale is to have Droppo become the Santa for Mars – seriously? I weep for the children of Mars. 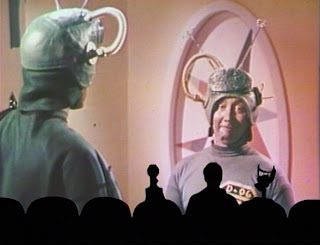 Director Nicholas Webster has no sense of pacing. Santa Claus Conquers the Martians drifts along, never gaining momentum, just slogging from scene to scene with lifeless abandon. This makes scenes with Droppo stretch into infinity. This film obviously had a pretty low budget, and for a script that actually has some scope - they had to actually create scenes on Mars – they are extremely limited in what they could do. So many of the sets and costumes are just plain laughable. But the best stuff is the “polar bear” and the “robot”. For me, these are the highlights of the film and generate plenty of laughs by themselves. Oh and I can’t forget the song “Hooray for Santee Claus”… yeah you read that right. It’s as painful as it sounds.

Only Joel and the bots have the power to riff us through this mess. But will their combined power be enough? 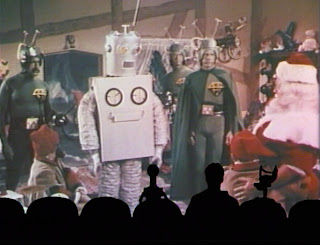 This movie is just bursting with odd characters and bizarre sequences, its tailor made for MST3K. For the most part Joel and the bots do a good job with it. They have a lot of fun when the Martians travel to earth and try to abduct Santa Claus. The entire sequence at the north pole is full of great riffing as the Maritans land, the kids escape, the polar bear and the robot are utilized and Santa’s elves get petrified. For me, it’s the best set of riffing in the entire episode.

But once they get Santa and take him back to Mars the riffing slows down along with the movie. The middle portion of Santa Claus Conquers the Martians is a slog as Voldar and Kimar argue, Santa meets the Martian kids and Droppo acts like a moron. The pacing during these scenes is killer and Joel and the bots just don’t have much to work with. 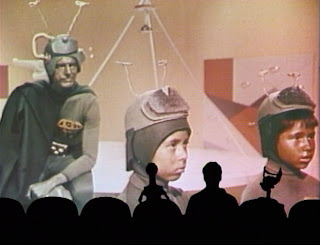 Finally Voldar puts his lame plan into action and conscripts to moronic followers. One of these guys looks like Jimmy Durante which leads to all kinds of jokes. This helps the finale spring back into shape with lots of comments during the climactic clash at the toy factory. By this time the guys have had enough of Droppo and the spontaneous laughter that Santa seems to create, so they just let the movie have it. The finale is pretty darn hilarious with some great riffing matching the stupidity of the ending.

The host segments are a mixed bag. Things start off with Crow and Tom looking over Christmas catalogues. For the invention exchange Joel shows off some serious misfit toys and the mad scientists create a machine that turns cool Christmas gifts into boring ones. The first break has the best of the host segments. Crow has written a new Christmas carol inspired by the movie Roadhouse. Its called “A Patrick Swayze Christmas” and it’s hilarious. The next break has Joel and the bots reviewing all the television Christmas specials they have on tape. The next host segment has the gang on the Satellite reading Christmas essays. Tom’s gets really dark. When the movie is over they celebrate by singing “Angels We Have Heard Are High”, check out the loot in their stockings and watch the Mad Scientists exchange gifts.

For me “A Patrick Swayze Christmas” doesn’t keep this episode from falling into an average rating. I enjoy it when I watch it, but compared to the hilarious season five offering Santa Claus and the excellent season eight Jack Frost this one really pales in comparison. I know lots of people love this episode, but each year I give it a try and each year I give it three lazy Martians out of five.

This episode is available on Mystery Science Theater 3000 Collection – The Essentials. 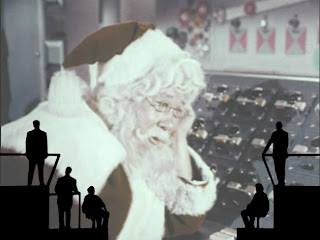 If you are willing to miss out on "A Patrick Swayze Christmas" then I heartily recommend Cinematic Titanic's riffing session of Santa Claus Conquers the Martians. It seems that Joel and company felt they could have done a little more with the episode, and now with a total of five riffers on hand they give it a shot. The results are hilarious.

Ironically, they use the complete version of the film (the MST3K episode was edited for time). No new scenes are included, but now certain sequences are longer, especially the visiting the elder sequence on Mars. As if this slog of a movie needed any more padding! But the new footage is great for us old time MST3K viewers makes the viewing experience new... or at least a bit different.

The riffing pacing is a lot faster, and everyone gets some great lines in there, including Frank who yells a perfectly timed "DON'T TOUCH THAT!". Yes the movie is still horrible, but the riffers have some fun with the fact that some of them have enduring this flick before. The episode starts with Trace attempting to run away the minute he finds out they are watching Santa Claus Conquers the Martians. It ends with him and Josh attempting to see who can survive the end credits and the hideous song the longest. For me this is the superior riffing version of this flick and well worth catching.

It's available on Hulu or in a DVD direct from the folks at Cinematic Titanic. They've also done a live show or two featuring this flick.
Posted by Roman J. Martel at 6:00 AM