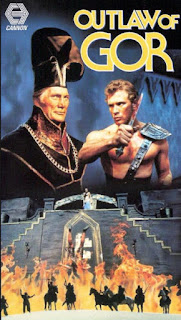 Summary
Poor Professor Cabot (Urbano Barberini). He misses his girlfriend Telena (Rebecca Ferratti) in the mystical land of Gor. Last time he crossed dimensions, he became a hero, but these days he’s hanging out in bars with his super annoying friend Watney Smith (Russel Savadier).

Suddenly they are both sucked back into Gor and find themselves mixed in a conspiracy between the lovely Queen Lara (Donna Denton) and the scheming high priest Xenos (Jack Palance). Its going to take wits, sword swinging and magic to survive. Well that and the Midget Hup (Nigel Chipps). That's his name folks. Prepare yourself for endless scenes of wandering in a desert, endless scenes of people saying "Cabot" over and over again, and endless scenes of people wearing next to nothing and flailing about with fake weapons. Will Cabot remain the Outlaw of Gor or will he clear his name and get the girl?

Movie Review
The 1980’s proved to be a pretty rich time for low budget fantasy films. Conan the Barbarian started this whole trend off and we entered the Barbarian Age of fantasy movies. And if you loved your fantasy films with a bit of skin and lot of dumb dialogue, than this was the decade for you. This film (also going by the names Gor II and Outlaw of Gor) is a sequel to Gor. These were loosely based off a series of sword and planet adventures started in the late 60’s by John Norman. These types of stories were modeled off of the John Carter series by Edgar Rice Burrows, but with a bit more sex and torture.

This movie has more in common with Ator the Flying Eagle and Cave Dwellers then either of the Conan films. It was produced by Golan Globas, the subject of the film Electric Boogaloo: The Wild, Untold Story of Cannon Films. So you kind of know what you are getting into. Not only is the budget on the low side, but the film is poorly written and put together. Some attempt was made to make the kingdom and castles look a little interesting. Having never seen the first Gor film, I’m guessing some of these sets and costumes were carried over. Sometimes they look very silly, but hey that’s part of the fun.

One side effect of the costuming is the fact that a lot of skin is shown. And I mean a lot. Cleavage and long legs abound. For the ladies watching, they get multiple shots of men running around in short tunics and tight little briefs. I lost count of the number of shots of men splayed out and women bending over. Director John "Bud" Carlos knew exactly what kind of movie he was making, and Outlaw is certainly competing with Barbarian Queen in the skin department. Outlaw is a little less misogynistic, but not by much.

Much like Deathstalker and the Warriors from Hell the fight scenes are all pretty lousy. Most of the battlers look inspired by spastic chipmunks on a sugar high. No one comes close to hitting anyone else with any weapon. People jump around, I think to show how skilled they are, but I suspected they were suffering from seizures. The funny thing is the film is packed with battle scene. The most memorable is a female gladiatorial battle between princess Telena and two amazons who chewed all the scenery before entering the fray. The big finale battle scene in Outlaw is so stilted and random that you can’t help but laugh. This movie could have used rapid editing to hide the fact that these actors can’t fight.

The story is simple. Our hero goes back to Gor, gets framed for murder and must expose the plot. But the movie continues to botch things. Not one single character  in Outlaw has any motivation or exhibits rational behavior. One minute Watney is Cabot’s best bud, the next he’s a traitorous bastard. One minute Queen Lara is all chummy with Xenos the next minute she hates him. Talk about mood swings! Cabot never proves he’s innocent really, he just stumbles around, beats people up, and gets beaten up. Eventually Watney reveals the truth, but only because he’s about to be killed. What about the dwarf or Midget Hup as he is called in the credits? Well I have no idea who he is, or why he’s in the movie other than comic relief and showing his butt off.

Then there is the acting. Yeah it stinks on toast. Barberini isn't bad as Cabot. I'm guessing he was hired more for his physique as opposed to acting skills. But if Miles O'Keefe works as Ator, than I guess Barberini is fine as Cabot. Savadier is really good at being annoying as Watley. He's supposed to be smarmy which he gets right, and funny which he isn't really. He also manages to look oily in just about every scene he's in. Then there is Mr. Chipps as Midget Hup. He doesn't do much else other than follow Cabot around and act as a mascot of sorts in the film. Not going to fault Chipps for his performance, there just isn't much in the script for him to do.


But two performances in Outlaw are worth mentioning. Donna Denton as Queen Lara is hilarious. She chews the scenery vamping it up one minute and shouting imperiously the next. Not a drop of subtlety to be found, but you get the feeling she’s having a good time. One scene in particular where she’s yelling at Xenos she almost blows her line and it’s even funnier. Then there’s Jack Palance in full “I’m doing it for the money folks” mode. He wears some of the stupidest hats I’ve seen in a fantasy or sci-fi film. He can barely muster the energy to act with other characters. His wheezy delivery is just plain hilarious in this film. I guess he just wasn't as motivated as he was as Voltan in Hawk the Slayer. It’s a long way to City Slickers Jack – hang in there.

The music was borrowed from numerous sources, but I actually recognized a few pieces from the 1983 version of Hercules with Lou Ferrigno. IMDB has the composer listed as Pino Donaggio who is still composing work for Italian films. Honestly, his lush score may be the best part of the movie.

All told, Outlaw is a mess. It makes less sense than an Ator movie and has more skin than one too. I’m not sure who the target audience was, but I do know that the audience ended up being Mike and the bots.

Episode Review
I love when the crew tackles bad 80’s fantasy and they don’t disappoint here. Everything from the acting, to the costumes, to Jack Palance gets mocked for some really big laughs. Things start off with the bang as Watney won’t stop saying Cabot’s name. He literally says “Cabot” about thirty times in first ten minutes of the film. When he finally stops, the people of Gor are so happy to see Cabot they take up the chant. You literally spend the first 30 minutes of the movie listening to people say “Cabot!” “Cabot?” Cabot.” Cabot!” and so on. Mike and the bots join in at first, but soon grow tired of it, and then angry at it. The results are hilarious.

Jack’s “performance” gets imitated and improved with added lines and comments on the wardrobe. My favorite is when he’s in a chase scene, except Jack isn’t running at all. Crow says in an very good imitation “Jack’s not being paid enough to run.”

Some of the best riffing in Outlaw comes at the expense of the numerous shots of people’s hindquarters, cleavage and crotches. I have to hand it the writers for coming up with so many euphemisms for body parts and then working them into jokes. Its hilarious stuff, but it actually makes this one of the least family friendly episodes of the show. The movie has some serious sexual overtones in it (you know for this type of movie) and our boys just riff along with them to. When a particularly phallic pillar appears in the foreground with the queen in the background Tom says as the queen, “Oh I wish someone would invent the battery.” Yeah, I was a bit surprised.

All in all it’s a pretty good time, lot of laughs, but a few slow spots here and there. Cabot and the dwarf spend a lot of the middle section wandering around the bland desert and the castle intrigue is really badly written and executed. It doesn’t give them too much to work with and makes things flag a bit. As annoying as Watney is, he was a great source of jokes. When he disappears about halfway through the film, you end up missing the stupid slimy jerky.

The host segments aren’t bad. Thing start off silly when Mike and the bots are roughhousing aboard the satellite. Its all fun until Tom Servo gets hurt. The intro segment has the mad scientist showing off their time machine. It’s pretty goofy. Then Mike and the bots become Fabio, with the instant Fabio kits. Remember him? The first break has Mike going over his acting career in an album. It’s an odd segment. The next is a hilarious song number as Crow, Tom and Mike sing in old 20’s style about Tubular Boobular Joy. This is one of the best songs of the Comedy Central years. The next segment has the boys reviewing Jack’s autobiography called Palance on Palance, which includes a whole chapter on Tango and Cash. The movie ends and the boys show the Mads how many crotch shots there were in the movie – yeah it’s a long montage. The show ends with the Mads dancing. Kinda odd really.

All told, this is a pretty funny episode. I enjoy it, but not as much as Cave Dwellers or Deathstalker and the Warriors from Hell. The flagging in the middle and the couple of weak host segments keep it from the top notch, but I can easily recommend it for anyone who gets a kick out of the 80’s low budget fantasy film.

I give Outlaw four buffalo shots out of five.


And now I present the Madness of Queen Lara.