And Then This Happened... Santa Claus Conquers the Martians

Hooray! I thought I had posted an image from this fine film to our little caption game a couple years ago. I was wrong. So really, how could I resist putting one up this year. Tis the season and all that.

You know, one thing I've noticed over the years, is that Santa Claus in most family films and shorts is not really jolly, or even holly jolly. He's insane. For some reason the line gets crossed. Not sure if it is the acting, the direction or the story surrounding the character, but when Santa laughs the whole world wants to back away. I think most of this comes from the fact that MST3K and Rifftrax always find the most disturbing holiday films they can find for riffing, but that is my impression and I'm sticking to it.

Case in point. Good old Saint Nick in Santa Claus Conquers the Martians seems a bit unstable at times. I mean the man is interested in interplanetary conquest, so maybe he's more Ming the Merciless than Santa Claus. All I'm saying is that the FBI may want to open a dossier on this guy. 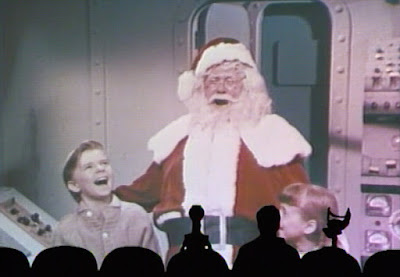