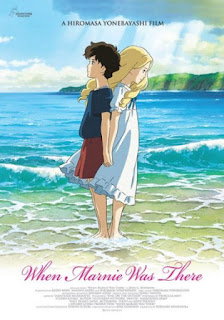 I assumed that Studio Ghibli had gotten all their spooky antics out of their system with the amazing Spirited Away. But it turns out that one of the last films the studio made was a supernatural puzzler… but you know, for families. I was just as surprised as you were. Could a studio long known for their family fare actually pull off a movie that has more in common with Vertigo than Kiki’s Delivery Service?

Anna Sasaki (Hailee Steinfeld) is at a rough age. She feels awkward and misunderstood at school. Her home life became difficult after she made an unwelcome discovery. It caused her pull away from her foster mother. After suffering a stress induced asthma attack, Anna is sent to the coast to live with her aunt and uncle. At first things don’t go much better, as Anna’s discomfort around strangers causes her to snap at the people around her.

But things change when she spots a strange mansion on the coast that is accessible only at low tide, but requires a boat to visit otherwise. Anna finds herself returning to the place again and again to sketch it and peer into the abandoned interiors. But one night she sees a young blonde girl inside the house. She eventually meets the girl, Marnie (Kiernan Shipka) who is the same age and also going through some tough issues at home. Anna is drawn to her new friend; despite the fact that no one else acknowledges Marnie or the parties her parents throw. And why is everyone in the old mansion dressed in 1920s fashions? Is Anna suffering a mental breakdown, or is she looking into the past, at a time When Marnie was There?

I was impressed by how well this film works. Anna is a very relatable character, even if she can be difficult. The more we find out about her, the more we understand her reactions to others and especially to Marnie. The film does a good job of never giving away too much about Marnie until the right moment. An easy recommendation if you are looking for a coming of age film meshed with a psychological mystery.

It is difficult to write too much about When Marnie Was There without giving away the mystery of the film. That mystery is one of the key elements that engages the viewer. But the core of the movie is the excellent characterization of Anna. When these two elements merge When Marnie Was There becomes a very effective and moving film, one that children around Anna’s age, and adults can relate to.

Visually Studio Ghibli did some wonderful work here. Don’t come in expecting those wonderful action flourishes or flying moments that thrill in the films of Miyazaki. Instead director Hiromasa Yonebayashi focuses on creating a sense of place and atmosphere in the movie. The coastal town where most of When Marnie Was There takes place feels like a real location. We see plenty of details in the buildings, the countryside and of course the mysterious mansion to have them crystallize in our minds. As Anna explores these locations we take them in with her. Details like a flapping curtain in an “abandoned” building or the way the tide creeps in closer and closer as time passes establish the feel of the town. Like Anna, we find it a bit strange at first, but soon come to enjoy its oddities.

For atmosphere Yonebayashi doesn’t go for anything as overt and mind bending as Satoshi Kon did with Perfect Blue. Obviously this isn’t a horror/thriller. But he does use some of the more subtle techniques that Kon would utilize, such as holding some shots just a little too long; building the mystery using pacing. He also uses light and shadow to great advantage, especially as Marnie and Anna meet more and more frequently. Darkness seems to be overtaking Anna and it adds a disconcerting feeling to the whole friendship. The strange hazy light during the parties creates a dreamlike feeling to those scenes. Even simple moments with Anna and Marnie on the boat and talking feel slightly off center. It all builds into in a wonderfully subtle feeling of unease..

The sound and the score do a good job supporting When Marnie Was There. The sound work is mostly real world sound effects, keeping the film grounded, even while are doubting our eyes. The score by Takatsugu Muramatsu works fine. It is low key, supporting emotions and atmosphere without drawing attention to itself. Some of the key emotional scenes at the end do rise to the occasion and work very well in the moment. But the score didn’t really draw me in with themes. That is fine, not every score has to. But I usually expect something a bit more colorful from Studio Ghibli films. The song during the final moments of the film Fine on the Outside by Priscilla Ahn is a soothing piece that works well in the film.

The English voice cast did a very good job in the roles. Steinfeld and Anna and Shipka as Marnie have the most challenging parts, and both ladies do an excellent job. Steinfeld keeps Anna relatable, even when we think she is being unreasonable. Anna’s struggles come through in the voice acting as well as the animation and Steinfeld’s performance is key. Shipka is also very good at making Marnie feel like a genuine girl, but also keeping a bit of the mystery to the character. It is a tough balancing act, and the animation surely helps. But some of Marnie’s lines need to be said in just the right way, and Shipka is up to the task. Aside from that the voice cast included several well-known names (Vanessa Williams, Catherine O’Hara, Geena Davis and John C. Reilly to name a few) keep things appropriate low key and believable.

Where When Marnie Was There really shines is in the execution of the story and the character of Anna. The film has three parts. The first establishes Anna and her life in the city. The second brings her to the coastal town and into contact with Marnie. The third comprises Anna’s attempt to figure out who Marnie is and the impact it has on Anna’s life. Each portion of the story must be told completely and well for the ending to have the necessary emotional impact.

Pacing is important, and I know the slow pace is not going to work for all viewers, I feel it is necessary. The story does a good job of establishing Anna in the first portion of the film as an introverted pre-teen that is having trouble coping with growing up. Her asthma attack seems to be a symptom of her anxiety. As the film continues we start to get more and more clues about Anna’s life. We find out that she is a foster child. We find out that her parents died when she was very young. Her natural insecurities are increased when she finds out a secret about her foster mother. Each piece of Anna’s puzzle gives her more depth as a character, but more importantly it allows us to understand her relationship with Marnie.

The build up to the first encounter with Marnie is handled so well. It is mysterious and dreamlike all at once. Because we know that Anna has some emotional issues already, we begin to wonder if any of this is really happening. That balancing act is maintained throughout When Marnie Was There. It makes it a very engaging watch the first time through, but I dare say that the characters of Anna and Marnie will draw me back for repeat viewings.

Finally I would be remiss if I didn’t point out a few correlations between When Marnie Was There eand the films of Alfred Hitchcock. Many of these may be unintentional, but I get the feeling they were not. The obvious one is that Hitchcock directed a film called Marnie. Next is that the mysterious woman in this film is the classic Hitchcock cool blonde with blue eyes. A key sequence takes place in a silo that could be dead ringer for the tower in Vertigo, and we even get a moment where the Vertigo zoom is used when Anna experiences a revelation. Anna spends quite a bit of time peering into window and watching the mansion from a distance, very much like Jimmy Stewart in Rear Window. You could say that the coastal town in When Marnie was There is a sister city to Bodega Bay featured in The Birds. I haven’t seen all of Hitchock’s films, but I’m guessing there are a few more nods to his work in the film.

But cast those aside and you still have a really engaging film. When Marnie Was There may not go down as one of the best films from Studio Ghibli. But it is well worth seeking out and watching. It shows that even at the end the famous studio could still craft a movie that draws viewers in and allows you to feel along with these animated characters.

Enjoy this review? Click an ad and support this blog.