And Then this Happened... In the Name of the King

So I'm giving you fair warning here, you don't want to confuse In the Name of the King with Lord of the Rings: Return of the King. Both are fantasy adventures, but one is a triumphant conclusion to one of the best film trilogies. The other is awkwardly hilarious start to one of the less notable fantasy trilogies out there. But hey, they can't all be winners right?

Now when you think of casting a king, who pops to mind? I bet the name Burt Reynolds didn't pop into your brain. I bet the Stay Puff marshmallow man would pop in there before Burt Reynolds. But hey, that never stopped director Uwe Boll from making all kinds of strange casting decisions. This may be one of his most unintentionally hilarious. But I figure it would make for some great captioning. So here you go. 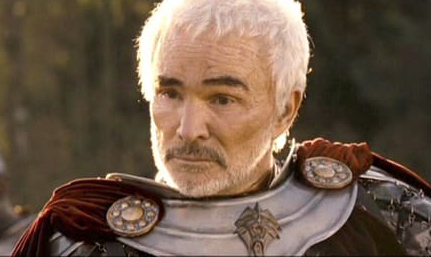