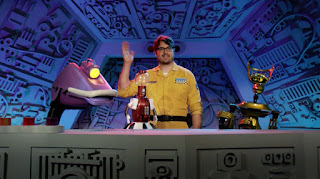 It took a massive Kickstarter campaign, the enthusiasm and guidance of Joel Hodgson and a collection of some of the brightest and best comedy writers and performers, but the impossible happened. Mystery Science Theater 3000 returned from the grave. In April of 2017, a new season was created and unleashed on the world via Netflix for new and old fans to enjoy.

Of course things were a bit different this time around. There was a new host, Jonah Heston who became our human trapped by a new mad scientist, Kinga Forrester. Crow, Tom Servo, Gypsy and Cambot all returned but with new performers (and voices). The show balanced this new crew with a faithful attempt to capture the feel and tone of the original series. The special effects were low budget, the host segments were a mix of corny and silly with a dash of song. The riffing managed to span a wide range of topics and generations while keeping things family friendly and fun.

The result was an impressive return that managed to do exactly what the show always did, expose the viewer to unfortunate films and provide plenty of laughs. The films selected for this season run the gamut from giant rubber monsters, 80's fantasy cheese, 70's Star Wars ripoffs and even a disaster movie. All the films are in color and widescreen and no short subjects were tackled. But all in all, the movies are some of the most entertaining yet and the crew does a fine job with them.