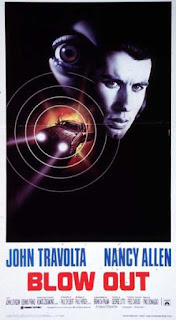 I’ve been trying to catch up on the filmography of Brian De Palma. The guy knows how to craft a great thriller, and his visual style is always enjoyable. One movie I always hear about is this flick from 1981 featuring John Travolta. As I’m looking over the cast list I wonder if he pitched this right after he did Carrie. But no he did a few movies in between. The concept sounded intriguing so I was looking forward to this one.

Jack (John Travolta) is a sound designer for low budget horror flicks. One night he is out capturing some sounds for his latest project when he witnesses a car accident. He rushes over to help and saves a young woman, Sally (Nancy Allen) from drowning in the submerged car. But a powerful senator dies.  Jack is questioned and some mysterious folks ask him to forget the whole incident and Sally.

But Jack feels that something is wrong. He goes over his recording and starts to piece together the sounds. It becomes more and more apparent that what appeared to be a simple tire Blow Out may have been caused by a gunshot. As he delves deeper into the investigation a mysterious man, Burke (John Lithgow) begins his own operation, and he’s starting to see Jack and Sally as real problems. Is Jack just paranoid or is there a conspiracy going on that may end up with him as the victim of the next accident?

This is a movie that is well crafted and maybe if I was in a different mood I would have enjoyed it a bit more. I really like the idea of a sound man capturing this key moment in an accident and realizing it might be murder. But I think the similar concept in The Conversation handled the whole thing a bit better. Travolta’s performance is a bit uneven at times, but his chemistry with Allen is what makes it all work. I’m not a huge fan of the ending, but the ride to get to it was fun enough. Worth checking out if you are in the mood for a 70s style thriller with a dash of DePalma’s style.