Summary
Amazingly adorable Nastenka (Natalya Sedykh) lives with an evil stepmother and wicked stepsister. Her life is one of toil and ridicule. Her father is a pathetic wimp who always agrees with the evil stepmother. One day Nastenka meets handsome braggart Ivan (Eduard izoltov) who tries to impress her but ends up turning into a half man half bear. All because he was a jerk to Grandfather Mushroom after an extended game of hide and seek (don’t ask).

Ivan runs off to do a good deed and turn back into a handsome man. Meanwhile after a matchmaking meeting goes poorly for the wicked stepsister, Nastenka is blamed for the debacle. The poor girl is taken out to the middle of the forest to freeze to death. Told you the stepmother was wicked! She is found by Jack Frost (Aleksandr Khvylya) the spirit of winter who takes her into his home. At the same time Ivan, attempts to find Nastenka and runs into the wicked witch, Baba Yaga (Georgi Milyar). She claims to want to help, but she is determined to eat Ivan and turn Nastenka into a frozen statue. Will our fairy tale heroes end up dead, or will they be saved by the magical powers of Jack Frost? 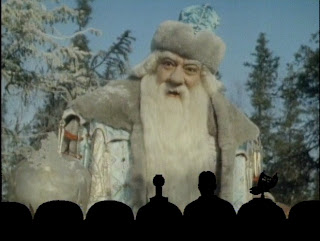 Like nearly all the Russian fairy and folktale movies tackled by Mystery Science Theater 3000, you can view these films in two ways. You can see them as colorful, entertaining films filled with magic, and child-like wonder. Or you can view them as insane, nonsensical bits of film containing some of the funniest dub lines uttered and strangest situations ever put on the screen.

As a lover of fantasy films, I fall into the first camp. Jack Frost or Morozko as it is known in Russian is first and foremost a fairy tale targeted toward children. The characters are simple. The situations are outlandish. There are moments that are supposed to thrill the single digit age crowd and put a smile on the face of adults who remember those folk tales fondly. 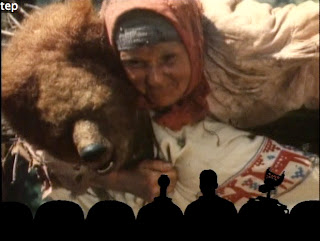 Jack Frost is really a compilation of several fables and story tropes combined together to make a single narrative. That explains why it jumps around quite a bit doing its best to work the Santa Claus-like figure of Morozko into the same tale as infamous witch Baba Yaga. To be honest, it takes some serious stretching to get there. Still we root for Nastenka, because she has a good heart and is pretty. At first we don’t like Ivan because he’s a braggart and rude to his elders. But after he turns into a silly bear headed man, he learns his lesson and becomes the hero of our story. He tricks Baba Yaga and does his best to save Nastenka after she is frozen. He has a good heart, he just needed to be shown how to treat others with respect. With simple lessons to learn, the movie isn’t a masterpiece of plotting, but an interesting grab bag of your favorite European and Russian stories.

Where the movie really shines is the amazing visuals and fun situations. For a Russian film made in 1964, this is an elaborate production, with colors popping off the screen and crazy costumes and special effects. Sure it’s all a bit dated looking now, but the magic is still there. Everything from animation to reversing the film is used to create the magical world. One of my favorite special effects is the silly wooden pig sled that goes racing over the snow. Its such a random sequence executed with a bit of string and sped up camera that you can’t help but laugh and shake your head. Every effort was made to make this fairy tale land come to life and I think it was handled very well. 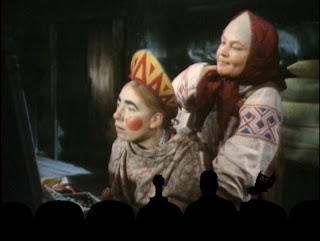 The acting is all over the top and silly. Not a single character plays a normal person. Nastenka Is so cute your teeth hurt. The witch is so wicked that you can’t help but boo her, and yet she’s silly enough that little children won’t be too frightened. My favorites are the nasty stepmother and stepsister. These two are so repulsive and horrid that you can’t wait for them to get their just desserts. Even Jack Frost appears as a mysterious force at first. You don’t know if you can trust him, but when Nastenka melts his heart, he’s like the magical grandfather your never had. Unfortunately the dubbing is uniformly bad, with lines coming out in a jumble or just not making a lick of sense. My knowledge of Russian myths and legends helped me follow the film, but if you’re not familiar with these stories you could get lost very easily.

As much as I appreciate Jack Frost, I can say that it is one of the goofiest things I’ve seen. The pig sled is only one example of random hilarity to be found here. Another is Grandfather Mushroom, a disappearing old coot who toys with Ivan. The witch’s cottage with legs and thuggish tree henchmen has to be seen to be believed. The robbers look like a mix of Michael Palin and schnauzers. Then there’s the entire matchmaker sequence where the stepsister gets gussied up for an interview with the eligible bachelor. Wow! It’s all done in the name of fun and magic, but its so over the top, and foreign at times your American mind can’t help but laugh. It was a perfect fit for Mike and the bots. Let's see what they do with it. 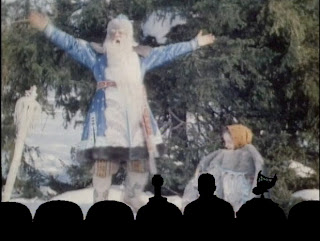 This is the fourth Russian fairytale film the crew tackled and in my book it’s the best one. The Sword and the Dragon was on the slow side. The Day the Earth Froze seemed to stun Joel and the bots with its strangeness. The Magic Voyage of Sinbad has the best riffing of the Comedy Central episodes, but really Jack Frost fires on all cylinders.

Part of the reason has to be that Sci-fi channel finally relaxed enough to let the crew to do something other than sci-fi or horror, and something that wasn’t in the Universal catalogue. After the endless parade of black and white John Agar-fests, I think the crew was exciting to tackle something in a bit more outlandish. What better way to celebrate than with an amazingly colorful and insane film like Jack Frost?

The boys get right to work commenting that the stepsister looks like Tom Petty in a baby’s crib. When they comment that the candy she’s sucking on looks like liver on a stick, you know you’re in for a good one. Grandfather Mushroom opens the door for drug related humor (“Isn’t that what they called Jerry Garcia?”) When Ivan turns into a bear, they can’t believe their eyes and just roll with it. The pig sled, the witch, the robbers - its as if the movie is just gift-wrapping the situations and characters for riffing. 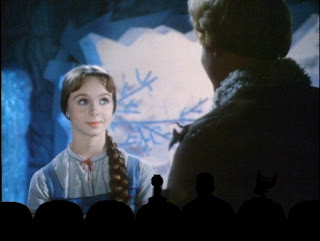 The boys have some fun with how darn cute Nastenka is, and how often her little face fills up the screen with her huge eyes. They get a kick out of the over the top acting provided by Jack Frost himself, as he rants, raves, and flails about. He bears more than a passing resemblance to the nutty Santa in Santa Claus. All the animals in the film are given their own lines thanks to Mike and bots, with the family dog and the evil cat getting the best ADR riffing. The boys are non-stop with the laughs. After another impossible and over the top occurrence concludes Crow says, “Well I guess this is just a magical land, Mike.” He pauses and then says, “I hate magical lands!”

But the hatred it feigned. The movie is too good to hate and so silly that you can’t help but laugh with it. The jokes are varied and plentiful, really making this a can’t miss episode for anyone who loves fantasy films and anything with a bad dub. 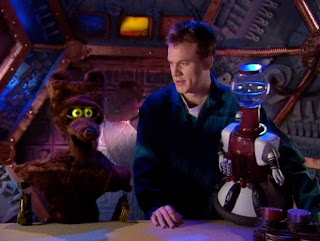 Sadly the host segments are really hit and miss. Pearl takes off and leaves Observer and Bobo behind on the “camping planet”. The two argue for a while before Mike steps in and nearly gets them to forget about the movie. After the first break Crow brings in Yakov Smirnoff (if you don’t remember him, good!) to comment on the film. He fails. At the next break, Crow has turned into a bear, just like Ivan in the movie! Mike and Tom don’t believe him. For the next break, Crow brings in another expert in Russian fables – Earl Torgeson. Yeah no one knows who he is either. When the movie concludes Servo tries to be as cute at Nastenka and fails. Pearl comes back in time to determine what the best ape movie ever made is.

This is one of the gems of the second half of season eight and maybe of the entire show. The episode provides lots of laughs. It’s also fun movie to watch during winter and makes for an excellent final part of a trilogy including Santa Claus Conquers the Martians and Santa Claus. I can hardly wait to inflict it on other family members this next holiday.

I give it five wooden pig sleds out of five.

This episode is available on the Mystery Science Theater 3000 Collection Volume XVIII.
Posted by Roman J. Martel at 6:00 AM