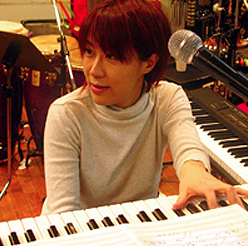 In the previous installment of my Favorite Composers series, I talked a bit about John Williams and his work. His music certainly impacted me during my youth, but as always, tastes and interests change.

In the late ‘90s my interests shifted over to Japanese animation and the world of Japanese pop and rock. While most of anime series featured plenty of scores focused on pop elements, there were a few with larger budgets that managed to get full bodied orchestral scores. Some of the best of these scores were created by a woman named Yoko Kanno.

When it comes to the work of Kanno, variety is the name the of the game. The first work of hers I obtained was the score to Macross Plus. This series is like a sci-fi version of Top Gun, but with better characters and killer artificial intelligence added for kicks. The AI at the center of the story is a pop idol completely manufactured to appeal to the largest number of people. Her concerts include amazing holographic images, and she can appear in many forms (all of them smoking hot).

Kanno’s score is all over the place. For the starfighter based scenes she uses a mix of Bill Conti’s heroic sound for The Right Stuff and Stravinsky’s style from The Firebird. It’s wonderful dynamic stuff. For scenes in the city of Macross and in the more urban environments she provides a vast array of music. Some of it could come from The Good, The Bad, and the Ugly and some of it sounds like techno-urban-vocal-jazz... if that makes any sense.

There’s her pop music for the virtual idol, Sharon Apple. Again it’s an eclectic mix, but one that makes sense for an idol singer who appeals to anyone. She does a jazzy piece that sounds like something out of Twin Peaks, another piece that could be performed by Enigma, and a rhythmic chant in Sanskrit that is exotic and sexy all at once. A techno jazz piece appears during an action climax where the hero attempts to break through a blockade of defense satellites. The result is exciting and iconic in the film itself. As a stand alone listen it’s a great piece of electronica. Here is the jazzy piece called: Borderline.

Finally there is the song "Voices" performed by the leading lady in the film. It comes in two different versions and adds a touch of bittersweet sadness to the whole series. Kanno's work here is what gives a real heart to this action oriented series and is the highlight of the Macross Plus soundtracks.

Since I enjoyed anime primarily in the 90s, most of my collection of her works comes from that period. But she's been busy working in animation and video games for years now. Still you'll notice that when I talk about her music, its for series that are pretty old. Take this piece called "Ark" from the long forgotten series Brain Power'd.

What really got me was when the series Cowboy Bebop came out. The score is a mix of jazz, blues, funk and rock. Not only does it fit the series like a glove, but the amazing array of styles and how well they are executed is impressive. Check out the extended version of the opening credits called: Tank!

The same woman who wrote and performed on that also gave us an amazing fantasy score to a series called Vision of Escaflowne. She takes various influences from classical works and fuses them with modern film scoring techniques. You’ll hear some Stravinsky, Holst and Wagner melted with John Williams and James Horner. One of the best pieces from the series is the thrilling track: Dance of Curse. It has a full chorus chanting along with the powerhouse orchestra.

One of her most powerful pieces comes from the film Jin Roh. She was brought in for the end titles, and that is her singing under her pseudonym Gabrielle Robin. It's called "Grace Omega".

When I first discovered Kanno, I was floored by her abilities. How could one person be so adept at writing pop, jazz, rock, and orchestral scores? Was she a musical genius? How come I’d never heard of her before, and why hadn’t she gotten discovered by Hollywood. Hell, the woman can even sing.

Well if you have some knowledge of film music and classical music than you begin to hear one of Kanno’s biggest issues. She takes her inspiration very directly and rarely masks it. It's a controversy that always comes up whenever I talk with more musically knowledgable folks.  Some call it plagiarism, and I agree in some cases she gets really close to the edge. But I believe that she adds enough of her own style or orchestrates the music with enough of a difference to make it unique. I always enjoy her music and to me that is the most important thing.

If you don’t mind the borrowing, her stuff is amazing. I can easily recommend the first CDs for either Cowboy Bebop if you like jazz, or Vision of Escaflowne if you enjoy orchestral. Both includes some J-pop songs as well, but they are darn catchy.

For the next installment I'll go into one of most famous composers of the Golden Age of film music. Even if you've never heard the name Bernard Herrmann - you have heard his music.