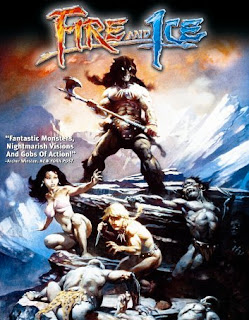 Introduction:
The early ‘80s was a boom time for fans of fantasy films. While not all the films were amazing, there was still plenty big names that have remained fantasy classics, with Conan the Barbarian probably being the most famous. But independent animation director Ralph Bakshi tried a second go at the genre and joined forces with one of the most popular fantasy illustrators of the time Frank Frazetta. Let’s see what happened…

Summary:
Lord Nekron (Stephen Mendel), who has to be evil with a name like that, is using his magical forces to push a ginormous glacier into the more temperate kingdoms and making a lot of enemies to boot. Larn (William Ostrander) is the only survivor of his destroyed village and on the run from Nekron’s legions of sub-humans. At the same time, princess Teegra (Maggie Roswell) finds herself captured, and escaping and getting captured again as part of a plot to get her father to surrender his kingdom. Then there is the mysterious adventurer Darkwolf (Steve Sandor) who wears a wolf’s head mask and wields a huge battle-axe. He’s got a score to settle with evil ice lord. These characters will clash in an animated epic battle of Fire and Ice.


Overall:
If you know what you’re getting, this is a really solid sword and sorcery adventure. It’s got some great scale to the setting, but the story is simple and straightforward, as opposed to something like Lord of the Rings. All the half nude bodies on display will either elevate your enjoyment or leave you feeling dirty. But the imagination on display and the way the whole visual experience creates a unique world makes it worth checking out for animation fans.

Ralph Bakshi’s take on Lord of the Rings in 1978 didn’t win him a lot of friends. Fans of the novels hated his editing and adapting of the story and characters. Newcomers to the story were confused as he tried to cram a book and a half of material into a movie 132 minutes long. Fans of his previous work like Fritz the Cat and Wizards were left wondering where the edgy animator went wrong.

I don’t hate his version of Tolkien’s story. It has a lot of good points (I’ll probably do a review of it somewhere down the line) and it introduced me to the world and got me into the books. But I think Bakshi understood that the elements of high fantasy were not what his style of animation was best at capturing. So it made perfect sense to team up with Frazetta, and utilize his more physical visuals for something more brutal and primal.

Bakshi was really into using rotoscope animation, where actors are filmed and then animated over. This technique has been around for ages, and was used way back for Gulliver’s Travels and the old Superman cartoons from the ‘30s. If used correctly it lends realism to the movement of the characters, something difficult to achieve until the advent of motion capture in the 1990s. Bakshi’s results are decidedly mixed in Lord of the Rings but Fire and Ice gets it all right.

Check out the first chase scene where Larn leads the sub-humans on a chase into a dense jungle. The movement of the characters, the way the camera angles around to capture the action and the tight editing keeps everything kinetic and exciting. The use of rotoscoping really adds to the scene and helps it work. In nearly every action scene, the same effect is captured.

One scene where rotoscoping is not used is during the assault on Nekron’s ice fortress by the flying dragon hawks. But the animation here is really top notch, with the beasts hurtling through ice caverns, dodging rocks and arrows and losing riders. William Kraft’s score kicks into overdrive here, combining the bombastic and the heroic very well. It gets a bit corny at times, but it’s still effective.

As straightforward as the story is, the script could have used a bit more tightening. Teegra spends most of the movie captured or escaping. It gets so redundant it feels comical. In addition there is a strange interlude with a couple characters who are introduced, and then killed off about five minutes later. This scene barely moves the story forward and gives us nothing new, except for a different half naked woman to look at.

Yeah, the amount of skin in this movie is pretty ridiculous. Frazetta is known for his mostly nude fantasy babes and completely ripped sword slingers, so it all fits with the style. But the movie makes sure to show you every last bit of beefcake and cheesecake you can image. Teegra’s introduction is practically soft-core, and the amount of running she does will break any jiggle counter you have handy. There’s nothing racy in the actual film, but it is all about titillation.

Fire and Ice is something I’d recommend to fans of animation, anyone familiar with Bakshi’s work, and folks who enjoy Frazetta’s art. But someone who likes fantasy that isn’t brutal and elemental, like the original Conan stories by Robert E. Howard, may find this to be a little too much of a good thing.