We all know that when a television series introduces a baby into the story it spells the end of the franchise. But with Tarzan, the series just plowed along. How did the franchise survive the dreaded baby film?

The happy Lancing couple is on their way to fun trip to Africa with their baby boy. Of course they proceed to crash land in the middle of Tarzan’s (Johnny Weissmuller) plateau. Jane (Maureen O’Sullivan) and Tarzan rescue the only survivor, the baby, and raise him as their own. He is called Boy (John Sheffield) and he is a handful.

About five years later a safari shows up lead by Sir Thomas Lancing (Henry Stephenson) who is convinced his relatives survived the crash. With him are the greedy duo of Austin (Ian Hunter) and his wife Mrs. Lancing (Frieda Inescort). These two stand to inherit a ton of money if they can prove all the Lancings are dead. Well once Boy is reveled to be a Lancing all hell breaks loose. Can Jane be convinced that Boy would be better off in London? Will Tarzan ever trust any white people ever again? And what the heck are the angry natives up to this time?

A huge improvement over the previous film, but not quite as good as the first two. Tarzan makes its transition from adventure entertainment to family entertainment, and it does it with style. 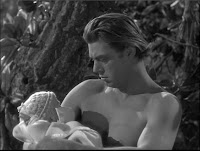 After the dreadful Tarzan Escapes I was seriously frightened by the concept of introducing a child into the mix. I’d seen what happened when The Thin Man series got the baby on board and it reduced the fun of that franchise considerably. But Nick and Nora were born in a world of adult sophistication and lots of booze. Tarzan and Jane fit the adventure tropes and its not a big jump from that into a family adventure with a target toward young boys. And that’s where Boy fares into the whole thing.

The movie doesn't hang around with the baby for too long. There's some funny moments in there, but Finds a Son wants to get to the more interesting stuff involving Boy around age seven or so. Young Sheffield is obviously having a blast running around with Weissmuller and O’Sullivan. He gets to play in the water, swing on vines, hang out with elephants and chimps. You can tell its all fun and games, and it carries over into the audience reaction. You’re having a blast because he is. Sure the movie milks his cuteness a bit too often, but its par the course for this type of film.

The whole inheritance plot is a bit stale, since nearly the same thing happened with Jane as the focal point in Tarzan and his Mate, but it builds a logical story based off the plane crash. It also gives us plenty of fuel for the safari shenanigans to ensue, including crazed natives, and attacks by animals.

But most of the animal adventures are saved for Boy and Tarzan to experience. The best sequences are when Boy gets trapped in a giant web that Shelob would be proud of. I also liked the scene where Boy nearly falls off of a waterfall after some roughhousing with Tarzan. There is a little bit of reused footage here and there. Some of the swinging on vines scenes are taken from Tarzan the Ape Man and still look oddly out of place. The rear project rhino from Tarzan and His Mate makes another appearance. These critters must be the bane of Tarzan's existence. I did like how the whole family has adopted variant versions of Tarzan's patented call. How did they find a kid that could do that? 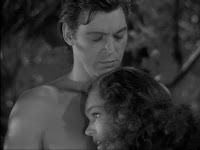 The best acting in Finds a Son still falls on O’Sullivan. Her moving speech to Tarzan trying to explain to him why Boy should go to London is handled well. As is the scene where she decides to betray Tarzan’s trust. When they meet again after this, and she’s been horribly wounded by a spear, the interaction is very effective. If I believed for a moment that Jane could die here, I would have been moved. But we all know that a spear to a back is only a flesh wound for main characters.

Turns out O’Sullivan was looking for a way out of the series at this point and the spear was intended to kill here. Boy was going to take over as Tarzan’s foil from that film on. But the studio was able to convince O’Sullivan to stay on. Can’t say I blame them, her chemistry with Weissmuller and Sheffield was excellent. Too bad she hated working with Cheetah the chimp.

All in all, Tarzan Finds a Son is a fun movie, but not as much fun as the first two. It’s a lot more family friendly and viewed in that vein it’s a good time. Worth checking out if you’re in the mood for some jungle action.

Read about the other lessons I learned from Tarzan Finds a Son at my review of the first collection of the films over at DVD Verdict.