In this explosive sequel to The Creature from the Black Lagoon, a group of scientists returns to the Blue Lagoon and finds Milla Jovovich… oh wait a sec. Ignore that. A group of scientists return to the Black Lagoon and using a series of explosives is able to capture the hideous Gil Man creature. Their goal? To take him to a prototype of Sea World in Florida and study him in front of hundreds of tourists. Can’t see how that could go wrong.

One scientist, the incredibly smug and condescending Clete Ferguson (John Agar) takes the lead in working with the creature. This requires him to wear tiny tiny swim trunks and use an electrified pole to prod the Gil Man. As if this wasn’t bad enough, they bring in the lovely Helen Dobson (Lori Nelson) to help with the experiments, mostly so Clete can speak to her in a patronizing tone. But seeing her in a swimsuit drives the Gil Man wild and he soon falls head over flippers for her. This leads to his daring escape, the death of several milk men, watching John Agar get funky at a dance and a chase into the swamps of Florida.

After the smashing success of The Creature from the Black Lagoon a sequel had to be made. At least, that’s what Universal thought. They had done well with the monster movies of the ‘30’s such as Dracula, Frankenstein and The Wolf Man. But with the ‘50s in full bloom, aliens in saucers and giant mutated radioactive creatures were all the rage. I think it took everyone by surprise that the Gil Man, a more old-fashioned creature, was such a big hit. Of course the original film was in 3-D and so was the sequel. Which explains all the shots of the Gil Man coming right at the camera.

While the first film kept things small and enclosed in the lagoon, this movie grabs the monster and brings him into civilization. Sure King Kong did it first, but many monster movies including Jaws 3 and The Lost World (Spielberg’s follow up to Jurassic Park) went along the same path.

Like King Kong the end result is that we feel bad for the Gil Man. He’s just enjoying his time in the Black Lagoon and these morons show up and take him to Marineland! There he’s chained, taunted by John Agar (which would enrage anyone) and electrocuted. Then the lovely Miss Dobson is parading around in her swim suit – well it’s enough to want to call Amnesty International or PETA or someone… Anyway...

When the creature escapes, I ended up cheering for the poor guy. I think we were supposed to be terrified, but the numbskulls that captured him deserved the strangling and drowning they receive. In the end, the creature takes the low road of grabbing Dobson and dragging her up and down the coast, while being attacked. 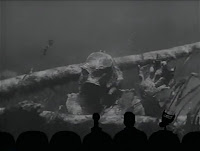 I will give credit where it is due. The story itself is a clear sequel, following the original pretty well. The logic behind it is sound. Once people hear about the Gil Man I can’t see them leaving him alone. I can even see someone dumb enough to think Sea World will be nice and safe for him. So the plot actually makes some sense. I also think the Gil Man suit is a pretty cool looking outfit. In his element he is pretty creepy looking, and the fact that it works underwater and has moving gills is all very nifty.

Sadly, the movie is plagued but some slow moments and meandering, mostly during the scenes at the Marine Park. Most of this material isn’t terribly interesting and only enforces the point that these people are cruel as well as not too bright.

Then there’s John Agar. He’s a standard character actor who’s done a lot of work. I’ve seen him in a few films and his smugness is always annoying. Here he’s in smug overdrive. The way he interacts with Helen goes beyond the standard ‘50s “oh you’re only a woman, what do you know”. But I think the script for him and the other male scientist is equally to blame. As a hero he doesn’t do too much and really reminds me of Cal Meecham from This Island Earth. If he wasn’t such an annoying guy, I might not side so quickly with the Gil Man, but there it is.

When it comes down to it, Revenge of the Creature isn’t a bad movie. It’s got some good stuff in it. The opening scenes in the Lagoon are handled well, and the stuff after the creature escapes is fun. There is a brief cameo from Clint Eastwood in the film (one of his first roles), so that’s a bit of fun. The film is competent, but not the kind of thing you’ll remember a few months after you see it. Luckily there is enough material in it turn it into the first episode of Mystery Science Theater 3000 on it’s new Channel.

1997 was the year when Mystery Science Theater 3000 came back from the dead on the Sci-fi Channel. Most of us fans had figured the series was history and some of us (mostly me and circle of friends) missed out on the elusive Season 7 episodes that only aired once on Comedy Central. So it was a big deal to have our favorite movie riffers back in action.

Of course there were a few changes. The sets were all new, a bit darker and more detailed. Gone was Trace Beaulieu who played Dr. Forrester and Crow T. Robot. New to the on screen team was Bill Corbett who took over riffing duties for Crow, and would become one of the villains, Brain Guy. The other big change was the attitude. The Comedy Central seasons always kept a light hearted fun feeling with the riffing, especially during the years when Joel Hodgson was hosting. When Mike Nelson took over duties as the main experiment, things got a little edgier and moved a lot faster. Well the gloves came off once the show hit the Sci-fi Channel. Mike and the bots attacked the films instead of simply riffing on them. This gives the final three seasons a different feel from the first seven, and can actually serve the show well, especially with some of the more dismal films they encountered.

In a way, Revenge of the Creature doesn’t deserve a nasty mean riff. It’s not that bad of a film. It’s certainly entertaining and has a goofy sense of fun to it. Lucky for us, I think the crew agreed. They don’t go too hard on it, saving most of the spiteful comments for John Agar and his character. Frankly I can’t blame them. But most of the time the comments are really reminiscent of Season six style riffing, quick, a little barbed and well timed.

Bill Corbett steps right into the riffing front lines and does a great job. He started out as a writer on the show, so I don’t think it was too hard for him to make the leap. His puppeteering is really rough in this episode, but he did improve as the series progressed. He did lack a lot of the subtle work that Trace managed with Crow, and while it’s missed, I do love Bill’s take on the character.

There’s a great series of riffs that starts right off the bat. When a title card appears saying A Tributary of the Upper Amazon, the boys mis-read it as: a Tributary to the Upper Amazon. They then provide a list of stars featured in the tribute ranging from Madonna to Helen Keller. Just when you think the joke is dead, Crow will chime in with a few more famous names, and then a few more. Bill’s timing is perfect and I love Mike and Tom’s reaction to the joke Crow just won’t let die.

The boys have a great time with Clint Eastwood’s cameo, with Tom even saying , “Oh he was terrible. His career is over.” They take on the bad use of music in the film, especially since it was borrowed almost entirely from This Island Earth! They also provide a bunch of prison jokes as the Gil Man is moved from the boat into the tank at Sea World. All the fish have some choice advise for the new inmate.

I’ll end with two of my favorite quotes from the film. One is during a scene where dolphins are featured. During a close up of the dolphin watching Tom says in the rough animal voice “We ARE smarter than you. If we had opposable thumbs we’d kick your ass!” Then there is the moment where John Agar and another male scientist are standing proud in their tiny little trunks and Mike says “At this point the swimsuits are really a formality”.

This season contained the host segments that were all one continuous story. In a way, I do enjoy the creativity involved in these, and all the sci-fi movie and television tropes the crew tackled. But when you watch the episodes out of order they lose a lot of the humor and fun. I know the crew at Best Brains hated writing these host segments and was forced to do so by the channel (as well as other odd stipulations like no short films and only films that fell in the horror, fantasy and sci-fi genre).

This episode has a lot to get done story-wise. It has to get Mike and the bots back on the Satellite of Love (they turned into pure energy at the end of Laserblast). It has to explain why Crow sounds different. It has to provide a reason why Mike and bots are still watching bad movies. And finally it has to introduce the new villain, Pearl Forrester (Clayton’s mom). On top of all of this, the crew was able to make fun of Plant of the Apes too.

As usual the host segments are silly fun. I enjoyed how Crow just didn’t remember Mike at all (although they milked the concept pretty dry in later episodes). This episode also introduces one of the side villains, the hilarious Dr. Bobo, an ape scientist played with a great deal of energy by Kevin Murphy. Bobo became one of the best characters in the Sci-fi years, and his introduction here is pretty hilarious. He tries his best to be a pompous scientist, but his ape nature keeps getting in the way. Eventually he evolved into a doofus, but here he’s more competent than the other apes. 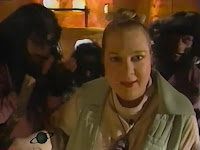 Mary Jo Pehl had been a part of the writing crew for years and had played numerous small roles during the older run of the show. In Season Seven she played Pearl Forrester as a cantankerous old woman who had her son under her thumb. But the Sci-fi years turned Pearl Forrester into an insane, power mad force of her own, and she did a great job. Her introduction here as “The lawgiver” is amusing as she monologues about why she hates Mike and the bots so much, and ends in an insane laugh.

All in all, it’s a fun start to a new version of the show. The film is entertaining and the riffing makes it better. The host segments are a bit plot heavy, but are fun. The only sad thing is that the likelihood of this episode being released officially on DVD is slim. Universal is being stingy with their films. Unfortunately nearly half of season eight is comprised of Universal monster movies. But if you manage to get your hand on this episode via DAP, I think you’ll find it worth your time.

I give it four tiny swim trunks out of five.

This episode is available on DAP