This episode has a short film about truck farming called… um Truck Farming. In it we get to see people picking crops, watering crops, putting crops in trains and then shopping for food. It’s odd, it’s kinda pointless, and it’s got a vaguely depressing feeling.

In the feature, James Wilson (Robert Lowell) lives a life of quiet desperation. Even though he’s the winner of an essay contest at school and it’s his birthday, his parents still don’t pay him any attention. They spend of their time drinking and partying and yelling at each other.

So Jimmy creates his own life, first by getting a job as a shoe salesman and then meeting the enchanting Kitty Reed (Mary Beth Hughes). The two hit it off, but Jimmy can’t bear to tell her the truth about his family, so he makes up some stories, and makes up some more and some more. But that’s OK because Kitty has a secret of her own. She’s the moll to Charley Blake (George Meeker).

When Charley and Jimmy meet things go swimmingly. Well, Charley sees that Jimmy is an idiot so he hires him as a gofer. Jimmy is too dumb to realize that he’s being used and goes right on wining and dining Kitty and running shadowy errands for Charley. Well this twisted little life can’t endure, and soon the law catches up to Jimmy.

With no other options, Jimmy goes on the lamb, meeting Happy Chef (George Lloyd) and a loaded gun. It all comes down to a trial where Jimmy boldly declares I Accuse My Parents.

The short film attempts to provide us with information about Truck Farming but never explains how it’s different from regular farming. Instead the short is focused on how crops can be grown in the southern US and used to feed the Northern US. There is mention made of how folks from Mexico come over on temporary work visas to help. Mostly you get to see a lot people working and looking depressed. In fact the whole short has this gloomy feel. The black and white photography only accentuates it. The final result is bizarre and unique in surreal kind of way.

I keep referring to this movie in many of my other reviews of Mystery Science Theater 3000, so I figured it’s about time I give it a proper review. For me, this is the most competent movie I’ve seen from director Sam Newfield. And this guy had a long and prolific career. That doesn’t mean its good, but it’s better than his others. The plot is silly, the acting is all over the place, and the songs are just plain goofy. But it has a sincerity and charm that keep it out of the stink pile. 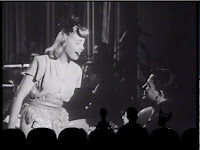 Mary Beth Hughes is a big part of the charm. Once she shows up in the film it gets a jump of energy. We can see why she entrances Jimmy and Charley. She’s got class, she’s got big ole eyes, she’s got amazing 40s hair. Yeah, the songs she sings are hilarious, but I don’t blame her. Hughes’ voice is fine, even if her stage performances are uninspired.

On the other hand we have Lowell as Jimmy. Lowell looks too old to be playing a kid in high school, but he gives it his best shot. He’s a bit too wide-eyed and sincere, but at the same time it makes us feel bad for him. We realize that he’s not only lonely and naïve, but that he’s not the brightest bulb either. He’s easily duped by just about everyone and we end up cheering when Happy Chef shows up to save his bacon. The rest of the cast if comprised of solid character actors who could do this stuff in their sleep.

The direction is functional, and the plot is completely ridiculous. Few people could be as dense as Jimmy and get into as much trouble as he does by performing courier services for the mob. The big problem is pacing. The movie plods along, the songs stop the plot dead and the characters aren’t terribly interesting. You get the feeling the movie was thrown together quickly and then Newfield went on to film Mad Monster or Lost Continent a few days later. What’s surprising is the mileage that Joel and bots get out of this one.

This is one of those cases where the short and the movie aren’t exceptionally bad or weird, and so you wouldn’t think that it would make for good riffing. But this Season Five offering is just the opposite. The writing here sparkles with all kinds of joke and moves a great pace. Because the films are so middle of the road, they actually provide the perfect amount of material to work with and around. 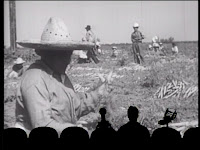 The short is dull, but the voice over provides so many cues to add riffing to that it’s almost too easy. As the narrator ponderously describes the journey of the carrots from the ground to the train, he explains how they are unloaded and then pauses. Tom then chimes in with “And loaded right back on the train and taken back to the field where they are replanted. It makes no sense at all!”

But the riffing on the film is where it the real meat is. The opening scene is the bookend trial of Jimmy. At this point we have no idea who all these people are and yet the camera keeps bouncing along through all of them. With each quick cut to a new face, Joel and the bots have a riff ready for each of them. Some of them are so absurd that they are hilarious. My favorite is reserved for Happy Chef. 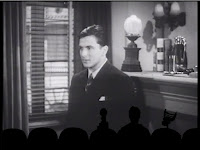 Jimmy’s victory at the essay contest provides a running joke. Every time he introduces himself to another character, one of the boys says in a whiney voice, “won the essay contest, you know.” The entire scene where he awkwardly tries to fit Kitty for shoes leads to all kinds of naughty jokes. Jimmy is just a dolt from the moment we meet him and crew has a blast with his character and his drunken folks.

The songs in the movie allow Tom Servo to get plenty of his own singing riffs in there. Some the lyrics are so dumb that he doesn’t need to say anything, but scoff in horror “the kiss way to the promised land?” I also like the little routine they do during one of the songs acting as patrons in the club all calling out “Check please!”

The riffing is steady and well timed, making this one of my favorite episodes, and one that I can pop on any time for some cheering up. I have run into a few people who find the movie so dull that the riffing didn’t help. And I think if you have a preference for the sci-fi, horror or fantasy films, this won’t work for you. 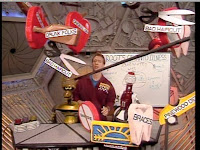 The host segments revolve almost entirely around the film. It starts with Tom Servo wanting to be a real boy – so he gets naked! For the invention exchange Joel shows off his junk drawer organizer, while the mads provide “Cake n’ Shake”, a cake mix that includes an exotic dancer – you know, for kids! At the first break Joel tries some art therapy on the bots. They’ve all got issues. The next break is a musical extravaganza as the crew creates their version of Kitty’s song (very similar to the Idiot Control Now segment from Pod People). For the third segment Joel and the bots try to use visual aids to explain Jimmy’s issues. The huge mobile is classic. After the movie ends the bots recreate the scene with Jimmy and Happy Chef. They’re packing heat and they want burgers!

In my book its easily one of the best episodes. It’s also a great one to start new viewers with. I give it five essays out of five!

This episode is available an individual disc from Rhino, but may be out of print.