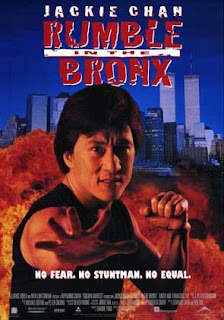 Introduction:
So back in the days of the video store I actually was helping a customer with finding the latest Charlie Chan movie. This was in the mid 90s, pre-internet era (a dim memory for some, I know). We had to rely on these big thick Video Movie Guides. So I look up the actor who played Charlie Chan and I find Werner Oland. I know we have a few Charlie Chan movies, but these all were made in the 1930s, I started to wonder if this young man was a film student or if something else was going on. Yeah, turns out he was looking for Jackie Chan movies because his friends told him about them. Ah, those pre-internet days…

Summary:
Keung (Jackie Chan) leaves Hong Kong and arrives in good old New York, New York for his uncle’s wedding. While he is in town he meets all kinds of interesting folks. There is Elaine (Anita Mui) the woman who is buying the market from Keung’s uncle. She is serious about getting her start in the big city. Then there is little Danny (Morgan Lam), who may be confined to a wheelchair, but has plenty of moxie. Then there are the 1980s style gang members lead by the nasty Tony (Marc Akerstream) who want to do nothing more than cause trouble.

One day Keung pisses them off while trying to protect his uncle’s car from vandalism. Now the gang targets Keung and all of his new friends, harassing him, ambushing him and generally behaving like jerks. Keung does his best to face them down, and keep his friends out of trouble, but things escalate. And when a crime boss, lost diamonds and an undercover police operation get thrown into the mix you know that you are in for a real Rumble in the Bronx.

It all depends on what you want from this movie. Are you looking for a goofy good time with some amazing stunt work and hilarious dubbing? Then step right up. You looking for gritty realism and some kind of social commentary (that makes sense), then you are looking at the wrong movie. Rumble in the Bronx is silly, often going right for the funny bone with a goofy premise and ridiculous characters. But the lighthearted feel works for it, because the movie breezes along. Add to it the amazing stunt work by Jackie Chan and his stunt crew and you’ll be wondering just how crazy he really is (and the outtakes show… he’s damn crazy). A fun weekend movie for sure.

One of the things I appreciate about Jackie Chan is his ability to play the ordinary guy. As silly as Rumble in the Bronx becomes (and yes it gets really silly) it remains grounded because Jackie Chan makes Keung a likable good guy. He’s in town to help his elderly uncle transfer the market to the new owner and celebrate his uncle’s wedding. He’s friendly with everyone, good-natured and humble about his martial arts training. Early on we see Keung run through a practice routine on a training dummy and you get a sense of Chan’s real skill. But one thing a lot of people overlook when watching a Jackie Chan film of this era (or earlier) is how Chan has a real knack for comic timing.

So you can sit down and watch Rumble in the Bronx and enjoy the amazing stunt work. Chan leaps off of buildings, gets chased through a parking structure in and around cars, attacked by flying glass bottles that shatter all around him, fights the gang in their own lair full of junk and gets dragged behind a hovercraft in the finale. The whole time you can tell it really is Chan doing the stunts, jumping off the buildings, getting hit in the crotch and somehow leaping over a pinball machine and turning it into a weapon.

As awesome as Chan is, you also realize something else. For all these stunts to work his fellow stuntmen have to be on top of things too. So when the martial arts action gets crazy fast, you can see these guys (and a few gals) are actually performing the stunts with split second accuracy and control. The outtakes at the end of the film show you what happens when mistakes are made and they look painful.

Director Stanley Tong films the action perfectly. Rumble in the Bronx is so memorable because all the action scenes are clearly filmed and never cut away to cheat. He moves the camera during the scenes keeping things kinetic, but he avoids shaky cam or seizure cam. Instead you get to see all the hits, near misses and hurtling bodies. It makes you realize how far action movies have fallen when you something as well filmed as this. And keep in mind most Hong Kong action fans will tell you that Rumble in the Bronx is a good movie, but there are much better Jackie Chan films to watch that do an even better job.

The other thing you’ll appreciate is that there is no CG in the film. So all the vehicular mayhem that happens in the movie is done for real right in front of you. I’m not talking anything crazy Road Warrior style. But the hovercraft chase in the finale is impressive for its sheer audacity and craziness. Downtown Vancouver will never be the same.

And yeah that brings me to the first issue some people may have with this movie. Aside from a couple of establishing shots of the Big Apple, this movie is filmed entirely in Vancouver. And to be honest they don’t even really try to hide it well (if at all). To me it becomes part of the surreal fun of this movie. Rumble in the Bronx is more of a fantasy action film than a straight up action film. No seriously. Stick with me on this one.

The setting of Rumble in the Bronx is an outsider’s version of America. Take what they’ve seen in Hollywood movies, maybe on the news, and distill it through a filter of the late 1980s and you get this strange world of the movie. In this world gang members wear bright florescent colors, ride around in dune buggies with blinking lights all over them, and have a lair full of pinball machines, shopping carts and refrigerators. The gang is also surprisingly multicultural and seems to shy away from using guns. They like to use baseball bats to hit empty bottles at people. They also don’t participate in any real crimes. They mostly just cause mischief, vandalize stuff and generally act like a bunch of junior high school kids hopped up on pixie sticks.

Like all Hollywood cops, New York’s finest are pretty much fat, lazy and confused in this movie. They don’t’ do much of anything, and when they do show up they only make things worse by accusing the innocent working class people that are being harassed by gangs and members of organized crime. By the end of the film it is Keung, the visitor to our country, that saves the day, stops the bad guys and even manages to get the gang to see the error of their ways.

In one of my favorite scenes of complete fantasy, Keung addresses the gang members like he is talking to naughty children. Of course he just spent the last ten minutes rampaging through their lair and managing to beat up most of them in various creative ways, so I guess they are willing to listen to him. Basically he tells them all to grow up and get a life. He ends by saying, “I hope next time we meet, we will drink tea together.” To which the leader of the gang says, “Did he really mean that?” And no he’s not saying that incredulously, he actually sounds moved.

Now keep in mind he may sound that way because he’s dubbed. Everyone in Rumble in the Bronx dubbed, even obvious North American actors. The result is this odd disconnect giving the film an even more fantastical and surreal quality. Some of the dub lines are so silly and delivered over the top or in a confused way that you can’t help but chuckle. One of the most bizarre elements is the dubbing for any black characters. It is such a ridiculous sounding caricature you wonder if it was done on purpose or was just the way the Hong Kong crew thought black Americans in the inner city talk – like hip hop characters from a music video from1991.

One of my favorite dub characters in the movie is little Danny. He gets so many horrible lines and delivers them with such enthusiasm you can’t help but laugh. When he first meets Keung he yells, “Hooray! You’re number one!” This line became an instant quotable around the video store I worked at. But I also love the moment when he starts talking about how his sister (played by a fetching Francoise Yip) neglects him. It is so sappy and silly and hilarious. But then you get the moment when he starts yelling “My cushion! He stole my cushion!” This is hilarious both in and out of context.

Then there are the villains. That’s right, the gang isn’t the real force of evil in this movie. Instead (true to the 1980s action movie roots) you have a group of evil white guys in suits toting around machine guns and driving in big black cars. The leader is the rich and powerful bearded guy (dubbed with a hilarious deep voice). They are after diamonds after a deal goes wrong, and the diamonds get stuffed in Danny’s cushion (see the exclamation above). They spend the second half of the movie killing and rampaging. All these guys are hulking and talk in deep voices and tend to rely on guns rather then fists. So you wonder just how Keung is gong to deal with them.  And then leads to the hovercraft chase.

So Rumble in the Bronx is about as realistic as West Side Story in its depiction of New York gangs and crime. And for some that may be a deal breaker. But I find the whole package to be very entertaining. Is this how the Hong Kong crew thought America was? Or is this a reflection of the image 1990s American media was putting out there? Either way it makes for an entertaining setting. It is interesting how the evil businessman is greedy and destructive making him the real threat. Even the gang turns into anti-heroes by the end. But the everyman and his pals are get to stick it to the man with a hovercraft. And what isn’t enjoyable about that?

Jackie Chan went on to do Rush Hour and Shanghai Noon. Those were fun and all, but I will always hold a space in my heart for these mid-90s films directed by Stanley Tong including Supercop and First Strike. Rumble in the Bronx may be my favorite because of it’s ridiculous setting and amazing action scenes. Seriously if you see no other part of this movie see if you can find the battle in the gang’s lair. Your jaw will drop at the stunt work on display. Really impressive stuff.

Enjoying all the content? Click an ad before you go.
Posted by Roman J. Martel at 6:00 AM