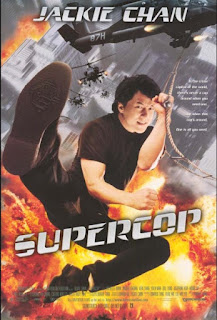 In 1995 Rumble in the Bronx unleashed Jackie Chan on an ignorant North American audience. And those of us that liked it wanted more. So Miramax was quick to respond by grabbing another Jackie Chan film directed by Stanley Tong. But it was an older movie, part of a series called Police Story. In fact this was the third installment. But hell, that didn’t matter. Just rename it, get Devo to sing the end title song and rename his character Kevin the Supercop and you’ve got movie gold! Right? Tell me I’m right.

Drugs are flooding into Hong Kong and “what we need is a Supercop and we need one now!” So Kevin (Jackie Chan) is dispatched to discover and stop the source of the drugs. This takes him to China where he is teamed with Inspector Yang (Michelle Yeoh) a no-nonsense officer whose skill are a perfect match for Kevin’s. They come up with a mission that puts Kevin undercover and working with a man called Panther (Wah Yuen). Panther’s drug connections lead them to Malaysia.

It’s there where things get tricky because Panther is only the second in command. The ruthless Chaibat (Kenneth Tsang) has started a war with other organized crime groups in Southeast Asia and things get out of hand very quickly. Kevin and Yang will find themselves escaping a coalmine, fighting angry police officers, dodging bullets and missiles, and even attempting to land a motorcycle on a moving train (yeah Michelle Yeoh is just as crazy as Jackie Chan). But will all these heroics (by not one Supercop, but two) be enough to stop Chaibat?

While the plot is over convoluted and less jokey Supercop (also known as Police Story 3) still delivers the entertainment. Plenty of impressive and well filmed stunts and action scenes will keep you engaged. But the extended battle in the jungle goes gun crazy and loses some steam. Luckily, the lovely Maggie Cheung shows up for some silly screwball comedy as Kevin’s girlfriend who is clueless about his mission. The finale involving a helicopter, a moving train and a motorcycle is some of the most impressive stunt work I’ve ever seen. Michelle Yeoh makes for a great partner with Chan and while the movie is less fun then Rumble in the Bronx it is well worth checking out.

Support this blog (and my cat) and click an ad before you go.
Posted by Roman J. Martel at 6:00 AM