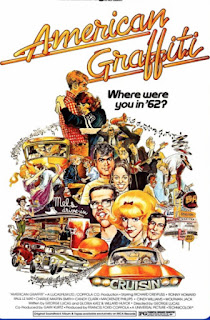 With all the buzz going on with Star Wars, it’s classic trilogy, it’s new trilogy and the infamous prequels, it is easy to forget that George Lucas actually made a couple of other films. In fact if it weren’t for the success of American Graffiti we would never have seen Lucas’ take on space opera. I used to have this film on Laserdisc back in the day. But I haven’t actually seen the movie in years. Is it a revisit worth taking or should this get lumped over in the corner with The Phantom Menace?

Summer is coming to a close for a group of friends in Northern California. The next day some will be go off to college, some will be stuck in the small town and some will wonder what the hell happened last night. Curt (Richard Dryfuss) is struggling with the idea of going to college, but an encounter with the street gang, the Pharaohs, might give him something to think about. Steven (Ron Howard) feels that he and his girlfriend Laurie (Cindy Williams) should be able to see other people while he is in college. This little revelation doesn’t go as well as he hoped.

Meanwhile Terry (Charles Martin Smith) takes Steven’s car for a cruise and meets a fun loving blond Debbie (Candy Clark) but in an effort to impress her, he ends up on an adventure he won’t forget. Finally John is the local street-racing star. But a new challenger approaches, Bob Falfa (Harrison Ford) who is determined to beat John with his racing rod. John is ready to race as soon as he dumps his unwanted tag along, Carol (Mackenzie Phillips) who is young enough to be his little sister and is just as bratty. All these kids will find more than they bargained for (including a cameo by Wolfman Jack!) in this slice of American Graffiti.

It should tell you quite a bit that this movie spawned an entire sub-genre. It was the first “last week of summer before college movie” and in my mind is probably the one to be topped. The cast does a fine job adding depth through performance for characters that aren’t too developed on the page. You end up relating to these kids and even if you didn’t grow up during the 1960s, their feelings and struggles are familiar. A spectacular soundtrack filled with great pop and rock songs makes the whole move feel like a nostalgia hued time capsule. Hop into your vintage car and cruise with Lucas down memory lane.