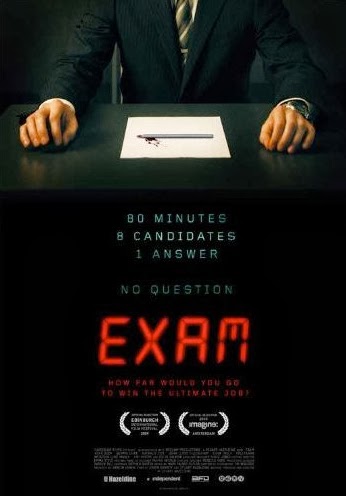 Introduction:
Most people hate taking tests. So it is easy to imagine creating an entire horror film about taking the scantron test from hell. Which character doesn’t have a number 2 pencil? Which character doesn’t fill in the bubble completely? Which character answers E – All of the above for everything and who ends up with one of those erasers that just smudges graphite all over the place? Yeah, doesn’t sound to riveting does i? Luckily this film takes a different angle.

Summary:
Seven people enter a room to take a test. The one who passes the test will get a highly sought after and lucrative position in a high paying pharmaceutical company. But this is no ordinary test. After they enter the room they are greeted by the Invigilator (Colin Salmon). He tells them that they have to answer a single question and follow three basic rules. If they can do this, then they pass the test. The rules are, do not speak to the Invigilator or the armed guard at the door, don’t spoil their single sheet of paper and don’t leave the room. Each of them has a desk, a sheet of paper and a pencil. The Invigilator leaves the room, and the test begins.

Of course, the sheet is blank, he never told them the question, and according to the ticking clock showing 80 minutes are left to complete the test. After some time the group works out things they can do, like talk to each other, move around the room, and brainstorm. Soon each one has a pseudonym they are calling themselves. White (Luke Mably) starts to take control of the situation, using various techniques to get other disqualified. Black (Chuk Iwuji) is convinced that if they work together they can solve the exam and all get hired. But not everyone else is convinced. The tension keeps building and the stakes are raised as more background to each character and the world they inhabit turns the Exam into a life or death struggle.


Overall:
In some ways this film reminded me of the low budget 1990s thriller Cube, but with a focus more on the characters than the cunning traps. It takes a group of seemingly normal people (although the opening credits which focus on each character preparing for the test hints at some of their differences) competing (or are they) for a job. But each one has a different approach and reason for applying. Each one has their own interpretation of the rules, and it is quite possible that not all of them are who they claim to be. It was fun to watch how the game shifted and who took and lost control of the situation. It was very entertaining, but dialogue heavy, so don’t go in expecting a ton of action.