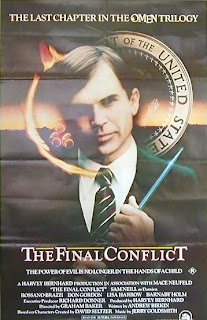 Introduction:
Sure The Omen gave us one of the creepiest kids in movie history, but what if you want to make sequels, you gotta do something with the character. Damien: The Omen II explored his life as young man. But this flick dives into his actions as a full fledged tool for his father Satan! Hell vs. Heaven!  Beelzebub vs. Jesus! Sam Neil vs. um… well…

Summary:
Damien is all grown up and now he looks like Sam Neil with bad hair. He’s a powerful businessman in control of the Thorn corporation. Of course they spend most of their time helping the needy and working with world governments to spread joy and happiness.

But in his off time Damien holds satanic meetings, plots the deaths of innocent children, attempts to outwit God, and corrupt anyone he can. But this won’t stop Father DeCarlo (Rossano Brazzi) from gathering a group of monks armed with sacred daggers to destroy Damien and help bring about the second coming of Jesus Christ. Prepare yourself for more bizarre death scenes, one hell of a fox hunt and another evil kid in this final film of The Omen series. The Final Conflict indeed.

Overall:
I see a lot of hate for this movie and it doesn’t really deserve it. Yeah it’s kind of goofy, but by this point the whole premise was over the top. For the most part everyone is along for the ride. Neil is really great in some scenes and seems to be struggling in others (maybe repressing his accent). Creative death scenes help this film a bit. The deadly monks aren’t used to the best advantage. But that didn’t stop Goldsmith from making one hell of a score with excellent themes for Damien and the second coming. If only the finale had been as over the top as it promised this could have been as good as the original. A fun flick if you go in with appropriate expectations.